• Thomas Kanitz began his musical studies at the age of 17 years with Prof. Mirko Dorner at the Staatliche Hochschule für Musik

(State College for Music) in Berlin and continued later on with Takis Ktenaveas.

in Europe, North America, Asia and the Middle East.

• As a cello and chamber music teacher, he taught during the same period at the Delhi School of Music, the State University of

VOX / New York,among others the complete works for string quartet by Max Reger.

(Rhineland Chamber Orchestra Cologne) and later on a member of the Dortmund Philharmonic Orchestra.

• As a co-founder of the „Mendelssohn Trio Hamburg“ with violinist Günter Marx and the pianist Ingeborg Schmidt-Noll, as well

as a   member of the Ensemble „Dortmund   Soloists“ he undertook  many concert tours in Germany, other European countries

and South America. With the Mendelssohn Trio he recorded the Piano Trio op 20 (1950) by Rene Leibowitz at the SFB Berlin.

Cello and Chamber Music. In 2002, he recorded the CD „Die verlangsamte Zeit“ (The slowed down times) with works by

his versatile musical experience 2011-2014 as the Artistic Director of the MUSON CENTRE in Lagos / Nigeria.

• Besides his teaching activities for Cello, Conducting and Chamber Music at the MUSON DIPLOMA SCHOOL of MUSIC

African singers and musicians, the "Rhapsody in Blue" by Gershwin, the first part of the Christmas Oratorio he also performed

and conducted numerous chamber music works, concertos, opera arias and choirs from Baroque up to contemporary music as

young musicians during the Summer Workshop of "Sounds of Palestine"

month in Hangzhou and Ningbo / China 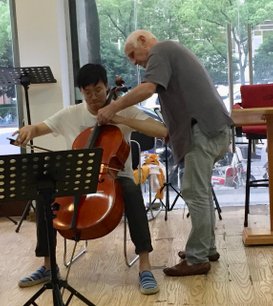 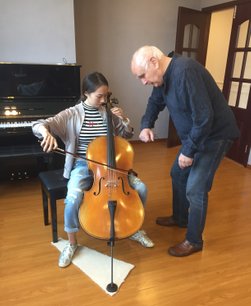 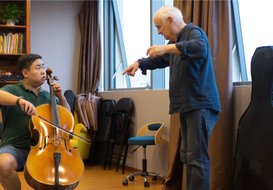